In 2017 we planted 5kg of classic Tassie purple hard neck garlic.  We did so in a rush, cultivating directly into pastured rows between our young fruit trees in the orchard.  We turned the soil over with the rotary hoe behind our trusty Kubota, excitedly sourced 5 kg of garlic which had already shot and was desperate to be planted, roughly spaced them and pushed them into the ground.  The garlic shot its head up and stood proudly and for that brief initial time we proudly looked over our lovely patch of growth.  However, life got busy and as could be predicted, the pasture wanted to reclaim its ground and started to smother our young garlic.  Many an hour were spent fighting the battle against the weeds, with 6 month old snugly in her back carrier, and our knees screaming at us we persisted only to find that by the time we had reached the end of the fourth row we needed to start again.  We finally harvested our crop in January of 2018 and as predicted we found lots of underdeveloped and small bulbs.  Although still super tasty and great for cooking, it was not a commercially viable crop, nor had we produced bulbs we would feel confident in planting again as seed.  So we gave away and sold of cheaply what we could and filled our pantry for the coming years cooking and vowed to try again next year.

Early 2018 we sourced out the wisdom keeper of garlic for Tasmania, the lovely Letetia Ware of Tasmanian Gourmet Garlic and gained all the information she was so kindly willing to offer to help us purchase viable high quality seed and to prepare our soil for future planting.  Prior to this we had cultivated 4 long beds in fresh ground in preparation for the new years crop of garlic, we had then covered this in thick black plastic for months to encourage the weed seed to sprout and then die off.  We were determined to fight off the competing weeds before we even started this time around.  We also covered the row laneways with thick cardboard and wood chips to prevent neighbouring pasture from creeping in.

When it came to purchasing seed instead of placing all our bets on one variety we branched out and split it three ways, with 4kg of Pepperton (Turban) garlic  and early harvesting and fairly all rounded well known variety; 2 kg of Dunganski (Standard Purple Strip) a later harvest with a high storage life and 2kg of Dolovsky with belongs to the Artichoke group and is a soft neck late harvest garlic with a distinct sweet taste.  We purchased the best seed we could source (at a much higher price than the previous year).  We fed the soil and added amendments, we also added in facultative anaerobes, soaked the split bulbs in seasol for 24 hours prior to planting to increase their sprouting growth, fertilised regularly with eco seaweed a certified organic fertiliser and added bio boost a pro biotic to the ground.  The weeds although significantly decreased from last year still did pop up and they were kept on top of and we were rewarded for the effort.  Harvesting the first crop of garlic occurred in December and although not consistently huge in size, we were pleasantly surprised to find that the majority of bulbs were of a lovely size and were of the quality that we would be happy to purchase ourselves if the buyer. We cured this outside initially laying it across a sheltered deck space to dry and then hanging under the car port near our back entrance.  It had been hanging for 8 weeks before being completely cleaned and trimmed and weighed.  In that time a few kg has been gifted to relatives so we won’t know the final weight grown, however of the garlic left ready for sale we yielded 23.5 kg. 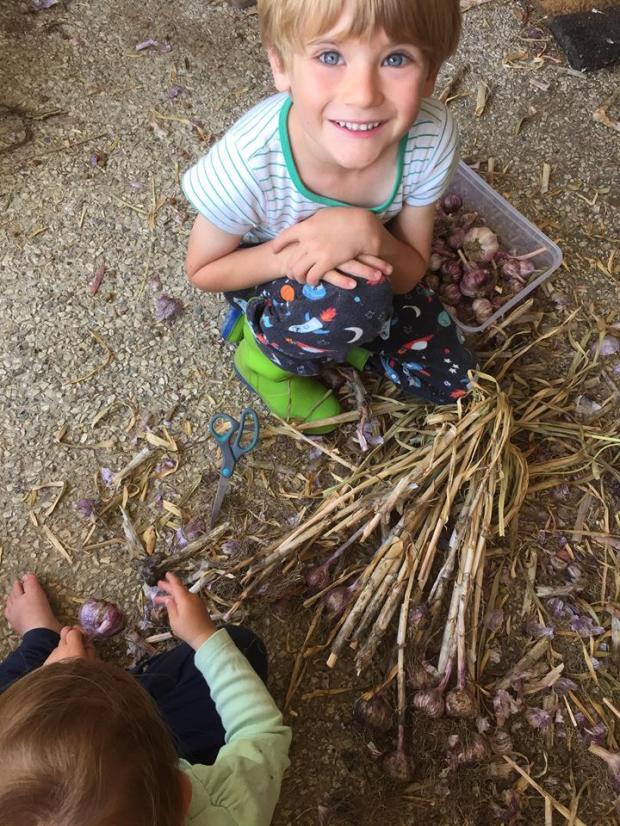 The Dolovsky were harvested next early January and had unfortunately suffered some bulb splitting (where the outer skin has split but doesn’t impact on the actual bulb itself); and the Dunganski was harvested late January.  Both of these later crops are still hanging to cure under the shelter of the car port and will be cleaned and weighed in a few weeks’ time.

So much learning, so much reward and still so much to know, but I feel proud that after our initial year and disappointment we built things up bigger and instead of walking away from the crop all together we dove in deeper. I think it sums us up really as a couple and a farm!

Kate is the dreamer, Sam the realist; together with our two little ones Elijah and Adele we are bringing Eska Farm into fruition.

Committed we are working towards a life of gentle progress, achieving sustainability for the long haul, creating zero waste and supporting a loving fulfilled family.